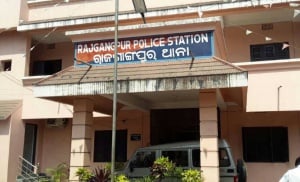 Three out of 4 robbers who looted Rs 10 lakh at gunpoint from a businessman in Rajgangpur in Sundargarh district last night, have been arrested this morning from Odisha-Jharkhand border.

All the arrested people hail from Jharkhand. While three have been arrested, the fourth one is on the run. A massive manhunt has been launched to nab him.

A bike and pistols have been recovered from the robbers.