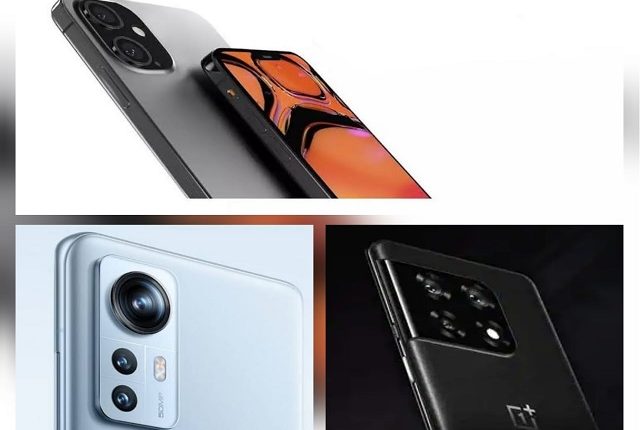 New Delhi: Despite the onslaught of Covid-19 pandemic and lockdowns, smartphone business scaled new heights globally in 2021. With new launches lined up, the smartphone industry is expected to keep up the momentum despite chip shortage and supply chain constraints.

Smartphone makers such as Apple, Google, OnePlus, Samsung and more are now set to launch the next-generation of products to attract the Indian consumers.

Check out the list of smartphones set to be released in 2022 with top-end features.

Smartphone maker OnePlus is all set to launch its next flagship handset ‘OnePlus 10 Pro’ on January 4 and the pre-registrations for the phone have already begun in the Chinese market.

The smartphone is expected to sport a 6.7-inch AMOLED display with a 2K resolution. The screen will be curved on either side and sport a hole-punch cutout at the top left corner.

The smartphone’s camera setup will feature a 48MP primary camera, a 50MP ultrawide camera, and an 8MP telephoto camera with 3.3x optical zoom. For selfies, the phone will come with an improved 32MP front camera sensor.

The OnePlus 10 Pro will come with support for 80W fast charging.

Apple is reportedly planning to launch a third-generation iPhone SE in the first quarter of 2022.

The new phone will have the new chipset — the 5nm A15 Bionic, adding support for 5G networks. Price-wise, the phone is expected to cost the same as the iPhone SE (2020) in China and around the world — $399.

Despite having a small-form factor, the new device will most likely be based on the iPhone XR design.

The Apple iPhone SE 3 will feature 5G connectivity instead of 4G seen in the iPhone SE 2020. The smartphone is also expected to come with improved performance with upgraded internals.

The upcoming iPhone is expected to feature a 4.7-inch LCD with bottom and top bezels, Touch-ID sensor/home button in the same aluminum body.

the Galaxy S22 Ultra, will be better at stabilising videos. An AI-assisted Wide Shift OIS feature will help in achieving better stabilisation of videos, effectively reducing camera shake by four times when compared to the S21 Ultra.

The smartphone is expected to come with a quad-camera featuring an enhanced 108MP ISOCELL HM3 (could be ISOCELL HM4) primary camera, a 12 MP ultrawide sensor, and two new 10MP Sony telephoto sensors with 3x and 10x zoom capabilities. The phone may also feature a 40MP front camera.

Samsung usually ships its flagship devices in both a Snapdragon and its proprietary Exynos chip variant, the version launched in India has traditionally been the latter. This time, the Snapdragon 8 Gen 1 powered Galaxy S22 series is heading to India as well.

The Xiaomi 12 is said to sport a curved screen with a centre punch-hole for the selfie camera, 120 Hz refresh rate and “2K” resolution, dual speakers, and a triple rear camera system with a 50 MP main sensor from Samsung or Sony.

Other possible features include 120W fast charging and an ultrasonic fingerprint sensor, as per the report.

As chipmaker Qualcomm is soon expected to unveil its next flagship mobile chipset, which will be a direct successor to the Snapdragon 888, Xiaomi 12 is tipped to be the first phone to be powered by the new chip.

Pixel is another eagerly-awaited smartphone in 2022. As far as the cameras are concerned, the Google Pixel 6a is rumoured to pack a dual rear camera setup featuring a 12.2MP primary camera, and a 12MP camera.

The smartphone may come with a single front camera setup for selfies, an 8MP primary camera.

The smartphone is said to feature a mid-range Tensor processor, probably a Tensor Lite SoC or Snapdragon 778G.

Pixel 6a may have 6GB or 8GB of RAM with 128GB of internal storage running on Android 12 out of the box, with guaranteed up to 3 years of version upgrades and security updates up to 5 years.
Also Read: Check out these 5 stunning smartphones launched under Rs 50k in India in 2022