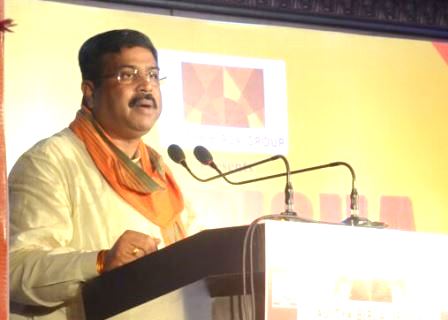 Will contest elections from Odisha in 2019: Dharmendra Pradhan

Bhubaneswar: Union Minister of Petroleum & Natural Gas Dharmendra Pradhan, on Saturday, confirmed that he will be contesting the 2019 elections from Odisha. He is currently a Rajya Sabha member from Bihar.

“I will be contesting from Odisha, whether Assembly or Lok Sabha elections is the decision of the party,” he said answering a query at the sixth edition of Odisha Literary Festival.

Addressing the gathering, he spoke on the poor documentation of Paika Rebellion which is why the state was deprived of its identity.

Refuting any panic situation caused due to the implementation of Goods and Services Tax. Answering a question on the drop in growth rate at the sixth edition of Odisha Literary Festival, he said one quarter should alone not be judged for the overall situation.

“Don’t come to any conclusion by the performance of only one quarter. There is absolutely no problem with the GST implementation. We have implemented a unified tax pattern in a country which is diverse. There are some initial glitches. The final settlement on GST will be done in the next few weeks,” Pradhan said.

On skill development, the Union Minister said every year around one crore workforce are entering job market and a skilled ecosystem needs to be created.

“We have to converge formal education with skill-based education and see  the synergy emerging,” he added.