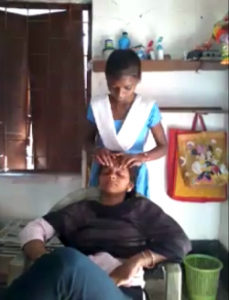 Sambalpur: In yet another incident that gives a fair idea about the way school students are treated by their teachers, a lady school teacher in the district was found to have engaged a student to give her a head massage during school hours. The case came to fore after a video of the incident went viral on social media on Tuesday.

The teacher, whose identity is yet to be established, is seen in the video taking a head massage from a girl student of the Kantamala Upper Primary School while relaxing on a chair. The video clip was secretly filmed by a local and then posted on social media.

According to sources, the student seen in the visual first reported her ordeal to her parents who together planned to unearth it. On the condition of anonymity, the student told the media that the teacher seen in the video regularly engaged students for head massage.

The incident has attracted sharp criticism from parents, locals and intellectuals across the State.

Notably, in a similar incident a couple of days ago, Amantpur Upper Primary School teacher under Baanrpal block of Angul district Sanjukta Majhi was suspended after a video showing school children washing her scooty in her presence surfaced in the media.