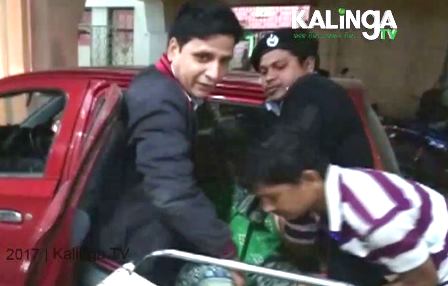 This is why Doctors called ‘Second God’ Bargarh: Allegations of medical negligence against doctors are common across the state. However, the newly appointed Dr. Sankar Ramchandini’s noble deed proves why the doctors are called the ‘Second God’ for the human beings.

However, when Dr. Ramchandani came to know about her, he carried her to the Sohela Hospital with the help of locals and provided her initial treatment. As her condition was serious, the medico later rushed the old woman to the Veer Surendra Sai Institute of Medical Sciences and Research (VIMSAR) in Burla in his own car.

Ramchandani’s exemplary action was greatly admired by one and all in the district. However, the newly appointed doctor opined that he did nothing more than his duty.

“I have done nothing more than what is my duty. It does not matter if a person is a doctor or not, he/she should help the needy on humanitarian ground. No prize or prestige is great than the self-satisfaction that one will get being the cause of a patient’s smile,” said Dr. Sankar Ramchandini while speaking exclusively to Kalinga TV. “It is the duty of the doctors to treat the patients irrespective of any obstacles. Besides, we have some responsibilities towards poor people as we have become doctors by studying in Government institutions from taxpayers’ money. Had we studied in any of the private Medical College, we would have spent huge amount of money to become a doctor. Therefore, we have some responsibilities for the society in general and poor people in particular in case of health services,” he added.

Notably, Dr. Sankar Ramchandini was the President of Junior Doctors Association (JDA) at VIMSAR in Burla.

No one has right to take law into their hands: Anubhav on Padmavati issue