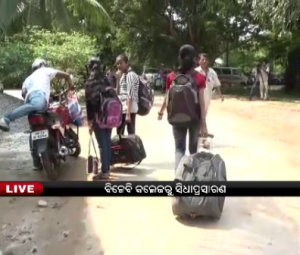 Bhubaneswar: Pre-poll violence has started dampening the spirits of students’ union election in BJB College here this year with bomb hurling incidents outside the ladies hostel on Thursday night. Concerned about their safety and security, inmates of the women’s hostel spent an anxious and sleepless night yesterday and started leaving the campus this morning.

It all started with a group students beating up an aspiring candidate in Arts Block of the college last afternoon. Things took an ugly turn inside the campus after friends of the thrashed candidate reached Bargarh police station and lodged a complaint. in the evening. A group of outsiders reportedly reached in front of the New Ladies Hostel at around 4 pm and hurled a bomb targeting the hostel. The guard of the hostel sustained injuries in the attack.

“We heard the first explosion at around 4 pm when we were inside our rooms. Rattled by the incident, the inmates immediately closed the doors and windows of their rooms. But it did not end there and the sound of a series of explosions was heard again at around 8 pm. Then we came out of the hostel and found it to be a case of bomb hurling,” said a girl from New Ladies Hostel while preparing to leave the campus.

Girls spent a sleepless night and met the principal of the college Prof. Mohammed Nawaz Hassan today morning to report the incident. Hasan assured them he would discuss on the matter during the staff council meeting, which would announce the notification for the students’ union election by the afternoon.