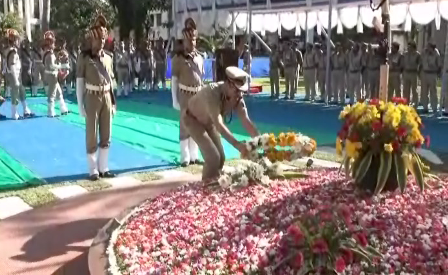 Bhubaneswar: The 58th Police Commemoration Day was observed across the state with much respect today and was marked with solemnity during separate functions held by the Odisha Police at Bhubaneswar, Cuttack and Koraput.

DGP Dr Rajendra Prasad Sharma led the event held at state Police Headquarters this morning and paid homage to the policemen who laid their lives in line of duty amidst gun salutes. A two-minute silence was also observed for at least nine policemen from the state who were martyred this year.

“A martyr column has been set up at the Police Ground here with the initiative of Koraput SP Kanwar Vishal Singh to mark the day. We would deal with the Maoist threat prevailing in the district more courageously in coming days,” said Shyni while speaking to the media persons.

Notably, the Police Commemoration Day is observed on October 21, every year to commemorate the highest sacrifice of 10 Indian policemen who were martyred in the Chinese attack in Ladakh in 1959.