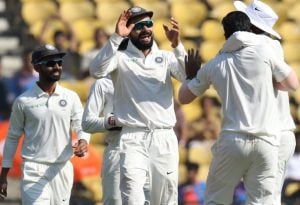 Nagpur: India trounced Sri Lanka by an innings and 239 runs to win the second cricket Test at the Vidarbha Cricket Association Stadium here on Monday.

The visitors were bowled out for 166 runs in 49.3 overs in their second innings just after lunch on the fourth day of the match. With this win, India took a 1-0 lead in the three-match series.

Ravichandran Ashwin, who picked up four wickets for India, became the fastest man to scalp 300 Test wickets. He was well supported by Ravindra Jadeja, Umesh Yadav and Ishant Sharma- all shared six wickets between them.

Earlier, India had declared their first innings at 610 for six, taking a massive 405-run lead. Skipper Virat Kohli top-scored with a fine 213. The other notable scorers were Cheteshwar Pujara (143), Murali Vijay (128) and Rohit Sharma, who remained unbeaten on 102.

Kohli received the Man of the Match Award.

The first test had ended in a draw at Kolkata. The third Test will be played at Ferozeshah Kotla stadium in New Delhi between December 2 to 6.