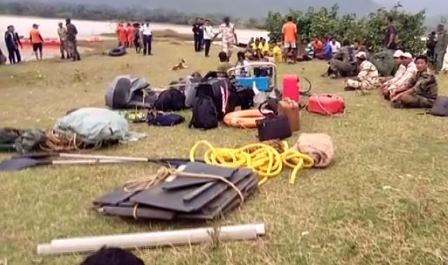 Cuttack: Body of the Indian Air Force (IAF) jawan, who was missing since yesterday night was found near Haripur Dam this afternoon.

According to reports, five IAF jawans from Charbatia Air Base in Cuttack had gone for parachute training near Mangrajpur village. However, all of them were missing following which a massive search was conducted by the IAF and National Disaster Response Force (NDRF).

While four of the IAF personnel were rescued, another jawan identified as Siring Dhaba was still missing. However, the security personnel intensified their search operation by engaging helicopters and traced Dhaba’s helmet and parachute from near Haripur Dam.

Later, the IAF jawan’s body was also recovered from the Dam, which is five kilometres away from the spot he was supposed to land.

Though the exact reason behind the mishap is yet to be ascertained, the dew factor is assumed to be the cause of the mishap.

Notably, the Charbatia Air Base is an Aviation Research Centre (ARC) and is a part of India’s primary intelligence agency Research and Analysis Wing (RAW).