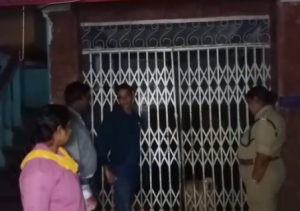 A team of cops from Infocity Police Station in Bhubaneswar arrived at Mohapatra’s house at around 2 PM and tried to meet him. However, police had to wait till morning 6 PM and finally came to know that the district BJP President had managed to give them a slip.

Infocity Police sources informed the raid was conducted after one Nina Dheer of Patia area in Bhubaneswar accused Mohapatra of duping him of Rs 1 Cr on the pretext of providing a plot. A complaint with Case No. 77/2017 has also been registered at the Infocity Police Station in this connection, under Sections 419,420, 468 and 506 of IPC.

On the other hand, the Mayurbhanj unit of BJP has criticized police’s move of raiding a senior leader’s house at midnight.

The Commissionerate Police team is still in Baripada and trying to track the mobile phone of Mohapatra to trace him.