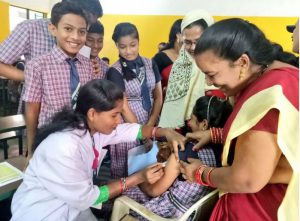 Under the drive, the government has set a target to vaccinate over 78 lakh children in the age group of 1 to 15 years in these districts.

The vaccination programme, which will continue for three weeks, will be carried out at all the Government schools, Private Schools, Shishu Mandir, Madrasa, Play schools, Orphanage and other places.

Last year, the killer JE had claimed lives of at least 120 children in Malkangiri district. The Government had already administered JE vaccination for over two lakh children between one and 15 years of age group from across the district in last December.