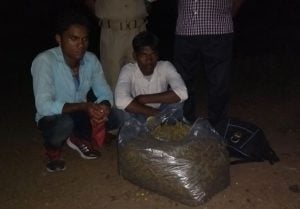 Dhenkanal:  Two persons were arrested and 8 kg of ganja was seized from their possession by the Special squad of Sadar Police Station at Gundichapada Chowk here on Tuesday midnight.

On a tip-off, the special squad arrested Subash Kumar Pradhan and Sumedri Naik, who hail from Biramaharajpur area of Sonepur district, while they were allegedly transporting the ganja from Boudh district to Bhubaneswar.

The police also seized a CBZ bike and two mobile phones from the accused persons. A case has been lodged in this connection and the arrested persons will be produced in the court on Wednesday, said Niranjan Patra, SDPO, Dhenkanal.