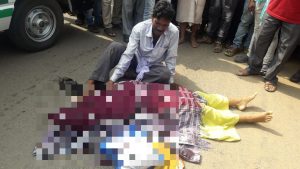 Baripada: A woman was killed while her husband sustained injuries after the bike they were riding on was hit by a dumper at Golei Chhak under Rairangpur police limits in Mayurbhanj district on Sunday morning.

The deceased has been identified as Rukmini Hansda (40) of Godadenga village of Kusumi block under Badampahad police station area.

The mishap took place while Rukmini along with her husband Gangaram Hansda set out on a journey to Rairangpur town this morning. At around 9 am, the bike (Registration Number OR 01 R 5138) the couple was riding on was struck by a speeding dumper coming from behind at Golei Chhak. Rukmini, who was riding pillion, sustained critical injuries in the crash and bled profusely. She died a few minutes later. Gangaram, who sustained minor injuries in the accident, was rushed to the Rairangpur Sub Divisional Hospital by some locals.

Traffic movement at the Golei Chhak was completely disrupted following the accident as locals staged a blockade keeping the woman’s dead body on the road. The blockade was removed only after Rairangpur Police reached the spot and seized the dumper. However, the dumper driver managed to give the police a slip.

Locals claimed that accident had become a regular affair at the Golei Chhak as the administration is not paying heed to their demands for setting up of a traffic police station at Rairangpur. While two fatal accidents have occurred at the Golei Chhak in the last two weeks, the officials are not waking up from their slumber, they added.