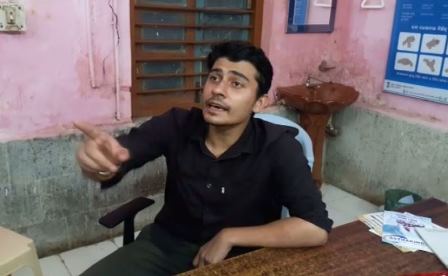 Malkangiri: Tension erupted at Malkangiri district headquarters hospital last night after an inebriated Doctor created ruckus in the emergency ward of the hospitalt.

According to sources, doctor Siman Mishra, who had joined the hospital on August 24, 2017, was caught on camera misbehaving with the kin of a patient from Pandipani village of the district. The patient’s relatives approached the junior doctor to get his signature on a form as the patient needed blood. However, Mishra, who was resting on his chair in an inebriated state, allegedly manhandled them as he was disturbed by them. Later, a war of words erupted between the kin of the patient and the junior doctor following which tension prevailed on the premises of the hospital.

The doctor admitted to have consumed alcohol. Later, the authorities of the hospital, including the ADMO, rushed to the hospital and sent back the doctor to his home to prevent any further flare up in the hospital.

Mishra’s misconduct has raised questions over the health services provided to the people of the tribal dominated district with many locals demanding stringent action against the doctor. “If the concerned doctor has no concern for the patients and no fear of action less than a month after joining, what will he do then when he becomes senior or is vested with some charges?” they asked.