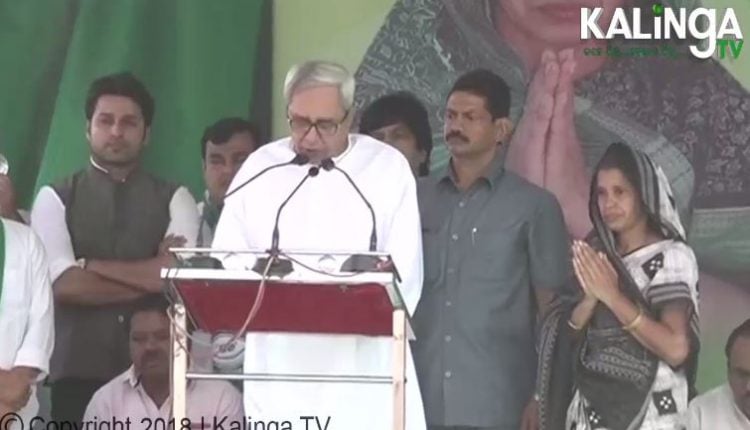 Bargarh: BJD President and Odisha Chief Minister Naveen Patnaik on Tuesday began his election campaign from Badagaon of Barpali block in the district to woo the voters in favour of his party candidate Rita Sahu for the Bijepur by-poll, which is scheduled to be held on February 24.

Addressing a huge gathering at Badagaon, Patnaik made an emotional attempt by greeting people with western Odisha’s most popular word ‘Juhar’. He also remembered the great sons of the soil and legendary poet Gangadhar Meher as well as renowned freedom fighter Bhagarathi Patnaik in his short but emotional speech.

The Chief Minister also recalled how Bijepur’s three-time MLA late Subal Sahu, who passed away in August 2017, for his efforts for the all-round development of the region.

“After the sad demise of your popular leader Subal Sahu, Sister Rita Sahu (wife of Subal Sahu) approached me to give her a chance to serve Bijepur for one year on which the departed soul of her husband would remain be peace in the abode,” Patnaik said.

“Impressed upon her self-confidence and dedication to serve the people, I gave the BJD ticket to Sister Rita Sahu,” Patnaik added appealing people to bless the BJD candidate and cast their votes for Conch, symbol of the party.

The Chief Minister maintained that the State government has created ‘Gangadhar lift canal system’ for the development of the farmers in the region.

However, the BJD supremo criticised the Union Government for applying GST for hand-loom products and assured the people that the State Government would appeal the Centre to free the hand-loom from GST net.

The Chief Minister will stay in the region till tomorrow to carry out election campaign in favour of BJD candidate Rita Sahu for the by-poll.

‘Development’ is exiled in Odisha for last 18 years: Smruti Irani