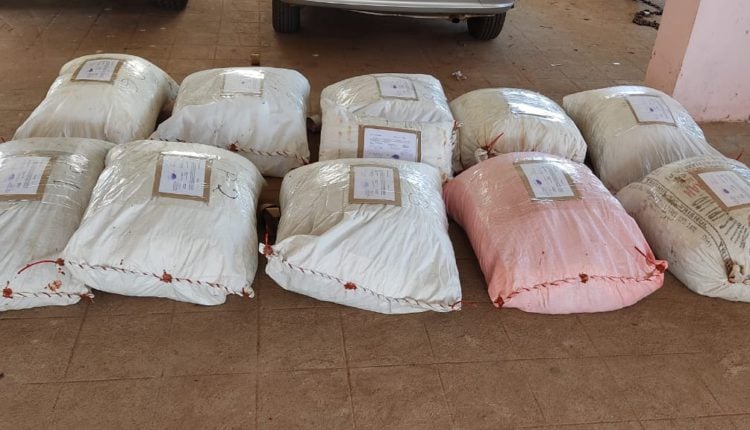 Bhubaneswar: The Narcotics Control Bureau (NCB) in Bhubaneswar has seized 250 kgs ganja from Rasulgarh area of Bhubaneswar, the capital city of Odisha.

The ganja was being transported in a very unique manner and was seized from a oil tanker bearing No. WB 29B 2501 at Rasulgarh area in Bhubaneswar.

The NCB has also arrested two persons identified as:

Sunil Ray belonging to Bhojpur district of Bihar and Agindeo Bin who is also a resident of Bhojpur, Bihar.

After investigation, from preliminary questioning it has been confirmed that, the source of the contraband is Koraput and destination allegedly is Bihar.

It is noteworthy that, now-a-days interstate ganja rackets are being busted in huge numbers.

A few months back, the Special Task Force (STF) of Odisha Crime branch seized 1 quintal 35 kg of contraband  from a car near Khandagiri area in Bhubaneswar and arrested three persons in this connection.

The arrested persons has been identified as Prasanta Majhi, Sujay Majhi and Prashant Kumar Gamango.

On basis of reliable information, the Commissionerate police along with STF team intercepted a vehicle during night curfew near Khandagiri area and during the search they found 1 quintal 33 kg of ganja worth one crore and apprehended three persons.

The contraband was illegally transported to Kolkata from Mohana area of Ganjam.

Due to the continous effort of STF, around 22 quintals 35 kg of ganja has been seized in the year 2021.