India’s boxing great Mary Kom’s bid to win a second Olympic medal came to end in the pre-quarters of Tokyo Olympics on Thursday after she lost to 3rd seed Ingrit Lorena Victoria Valencia of Colombia.

Mary Kom lost the match via split decision in a closely-contest Round of 16 match in the Women’s Flyweight category.

Here is how Mary Kom lost: 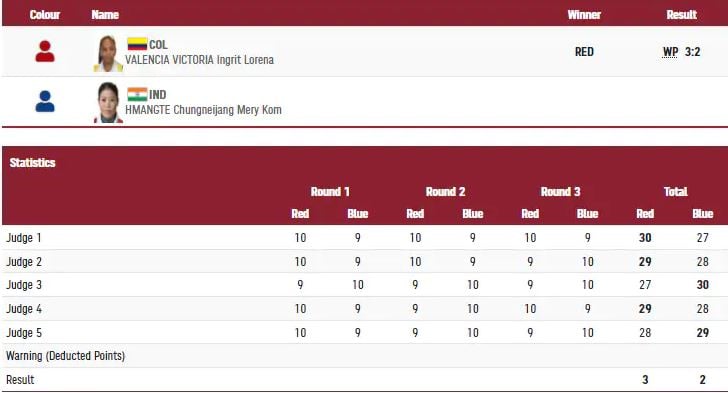 The 38-year-old Mary Kom, who had beaten the Colombian opponent in the quarter-finals of the World Championships 5:0 in 2019, lost the first round as Ingrit was quick to take advantage.

The Colombian 32-year-old, who won bronze at the Rio Olympic Games, took 10 points each from four of the five judges unlike the Indian 2012 Olympic bronze medallist, who could earn 10 from only one judge.

However, May Kom managed 10 points each from three judges in the second and third rounds as only two judges gave 10 to Ingrit in those rounds.

But due to Ingrit’s big advantage in the first round, the decision went against the Indian boxer who is also a six-time world champion.

This could be the last Olympic Games for the veteran boxer.

Earlier this week, Mary Kom had defeated Dominican Republic’s Miguelina Hernandez Garcia 4-1 in the first round.

Everyone eyes on Petrol and Diesel Price Hike, Have you ever thought of Edible Oil

All India Quota medical seats: OBC candidates to get 27% reservation, EWS students to have 10% reservation from this year