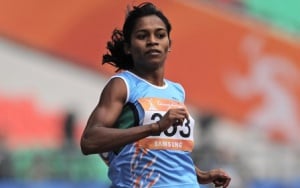 Patiala: Odisha’s Jauna Murmu on Thursday won Silver in the 400 meter Hurdles in the ongoing Federation Cup Athletics Championship 2017 at Patiala in Punjab.

The rising athlete of the state won the medal with a timing of 57.51 seconds.

With this, she surpassed the 15-year-old record set by Odisha’s Sahabani Oram. Oram had finished the line clocking a time of 57.60 seconds in Chennai in 2002.

R Anu of Kerala bagged the gold with a timing of 57.39 seconds while Arpitha M of Karnataka took bronze after recording a time of 57.64 seconds.

The medal tally of Odisha is expected to go up as Dutee Chand, Srabani Nanda and Amiya Kumar Mallick have already barged into the final of the 200 meter events.