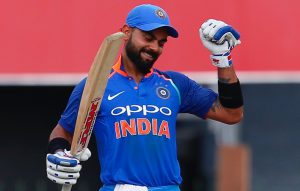 Team India continued their dominance over Sri Lanka even in the 5th and final ODI to complete a 5-0 clean sweep. They had earlier won the Test series 3-0.

Earlier today, Sri Lanka won the toss and opted to bat first. They could manage just 238 in 49.4 overs. Tharanga 48, Thirimanne 67 and Mathews 55 were the top scorers. For India, Bhuvneshwar Kumar took 5 wickets, while Bumrah took two.

Chasing a victory target of 239, India lost Rohit Sharma and Ajinkya Rahane early. But, skipper Virat Kohli held the fort at one end. He was well supported by Manish Pandey (36) and Kedar Jadhav (63).