Kolkata:  Sourav Ganguly and his daughter Sana engaged in a light -hearted banter on social media soon after India swept the series 2-0 against Bangladesh at Eden Gardens last Sunday.

Ganguly shared a picture on Instagram from the presentation ceremony in which he was seen sporting a serious look.n Sana posted a comment saying: “What is it that you’re not liking.”

BCCI President and former India captain Ganguly answered back: “That ur becoming so disobedient”.

Sana got back saying, “Learning from you.” 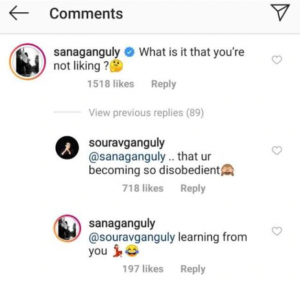 The cricket-crazy fans here came, they watched and they applauded. But Indias maiden pink ball Test wouldnt have been possible had it not been for Ganguly.

It was his vision and he left no stone unturned to ensure that India not only finally played a Day-Night Test, but also organised it in a manner that was nothing short of a spectacle.

Speaking to IANS, during the final session on the second day of the Test between India and Bangladesh, Ganguly had said it almost felt like it was a World Cup final being played at the historic ground.

“Just take a look around (fans with their camera lights on to click pictures). Do you see this? Have you seen this in Test cricket? When was the last time you had a capacity crowd watching a Test match? Feels like it is a World Cup final,” he said.

Virat Kohli and his quick bowling trio trampled Bangladesh by an innings and 46 runs to clean sweep the series 2-0 in their maiden pink ball Test at the iconic Eden Gardens last Sunday.

Kohli,s men sit pretty at the top of the ICC World Test Championship with 360 points.

Turkey holds over 3,700 irregular migrants in past week