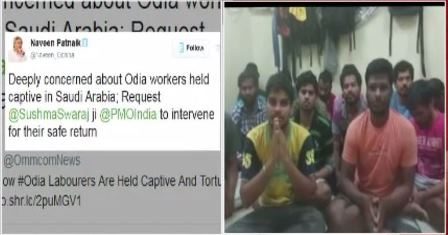 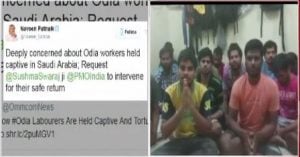 External Affairs Minister Sushma Swaraj has directed the Indian embassy in Saudi Arabia to facilitate the return of more than 20 workers from India, including 12 from Odisha, who have been allegedly held captive by a Saudi Arabian company on issues pertaining to salary.

In response to the tweet, the Indian embassy in Riyadh, had tweeted, “Embassy cognizant of it, vigorously pursuing with the Company n agent towards their repatriation; hope to send them soon.”

External Affairs Minister, known for her prompt response on social media, also retweeted it and directed the Embassy to keep the Chief Minister informed.

Pratap Deb for Rajya Sabha; Pradip Amat to be Speaker

Upholding interest of Odisha will be top priority: Pratap Deb