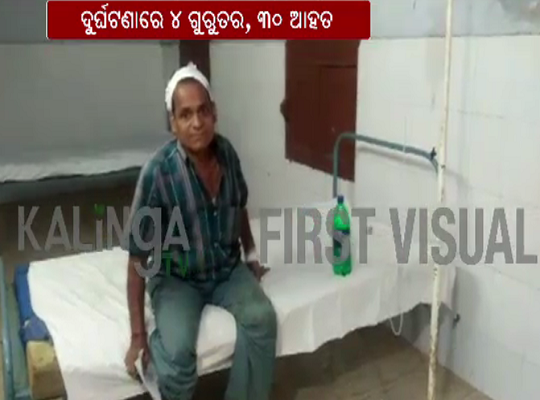 Angul, Mar 27: More than 30 persons were injured as a bus operated by the Odisha State Road Transport Corporation (OSRTC) overturned near Boinda in the district late on Sunday night.
Sources said, the ill-fated bus skidded off the road and turned turtle while it was on its way to Kantamal from Bhubaneswar.
More than 30 passengers were injured while conditions of four of them were critical.
Initially, all the injured were admitted in the District Headquarters Hospital for treatment, but two of the severely injured were shifted to SCB Medical College and Hospital in Cuttack as their condition deteriorated further.
On being informed, local police arrived on the spot and carried out rescue operations. Besides, it launched a manhunt to trace the absconding driver.
Though the reason behind the accident was yet to be ascertained, some passengers said that the driver fell asleep which led to the accident.