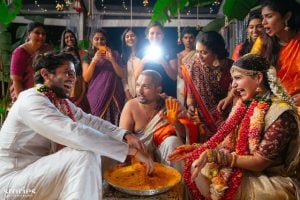 Goa: Tollywood actor Naga Chaitanya and his lady love Samantha Ruth Prabhu tied the knot in a lavish wedding ceremony in the presence of family members and close friends here on Friday.

In the three-day ceremony, the couple first got married according to the traditional South Indian rituals and later had a church wedding.

Samantha and Naga Chaitanya were seen happy and elated on the big day. The bride was dressed in a gorgeous traditional gold sari paired with gajra while the bridegroom was seen in a white kurta pyjama.

The videos of the marriage ceremony have already surfaced online and went viral in the social media. Naga Chaitanya’s father and Tollywood super star Nagarjuna Akkineni posted a couple of adorable pictures of the bride and the bridegroom on Twitter.

The actor, popularly known as Chay, had debuted in the 2009 film Josh, and has already featured in around 20 Telugu films.