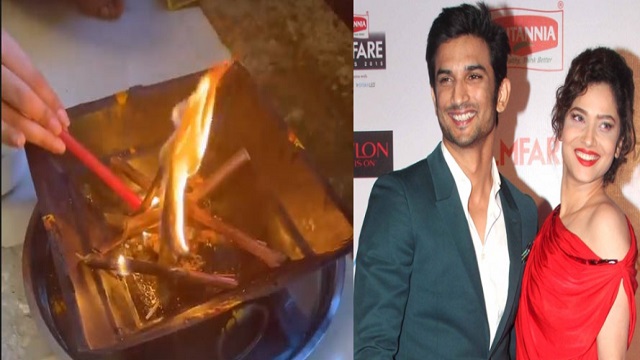 Mumbai: Ankita Lokhande who worked with late actor Sushant Singh Rajput in Pavitra Rishta, kept a havan for him on his first death anniversary. She even shared a video of  the Havan on her Instagram story where she had lit a lamp in the memory of Sushant.

The 34-year-old actor was found dead in his Mumbai residence on June 14 last year.

Ankita had also shared two more videos of their journey which had pictures of Sushant Singh with his closed ones. In one video the caption read, “14 June 💔 This was our journey !!!! Phir milenge chalte chalte✋”.  Whereas in the second video there were pictures of them compiled in a video where the caption read, ” This is who he was !!! Thankyou Sushant for your part in my journey 👋 See you again till we meet again 👋 Phir milenge chalte chalte 🙏🏻 Good bye ”

Earlier, Ankita Lokhande had told that she is taking a break from social media in which it was written, ‘This is not goodbye, we will meet again.’