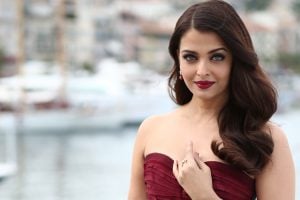 Even though she experienced several flops in her early days, 43-year old Aishwarya kept doing films one after another establishing  herself as one of the most popular and influential celebrities in the country and the world.

Her first success in Bollywood was the romantic drama Hum Dil De Chuke Sanam (1999). She played the main protagonist Nandini, a Gujarati woman who is forced into wedlock (with Ajay Devgan’s character) despite being in love with another man (played by Salman Khan).

The beauty queen also did some challenging roles like that of Raincoat, Shabd, Umrao Jaan, Guzaarish, Ae Dil Hai Mushkil and so on.

The blue-eyed diva got married to Abhishek Bachchan in 2007. The couple have acted together in a few films including Guru, Dhai Akshar Prem Ke, Kuch Na Kaho and Dhoom 2.

In 2009, she was awarded the “Padma Shri”, the fourth-highest Indian civilian award, by the Government of India for her contribution to the arts. She also received the “Ordre des Arts et des Lettres”, a national order of France in 2012.