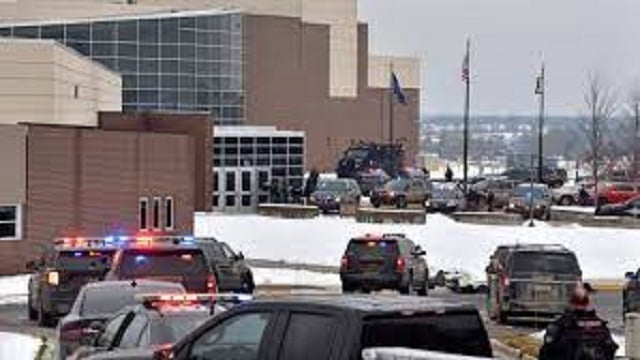 Michigan: Atleast three students were killed and eight were injured in a high school shooting in Michigan on Tuesday afternoon.

The deceased students have been identified as 16-year-old boy, a 14-year-old girl and a 17-year-old girl, informs Oakland County Undersheriff Michael G. McCabe in a news conference.

Of the eight injured, two are currently in surgery and the other six are in stable condition with various gunshot wounds, McCabe said.

The mishap took place shortly after noon while classes were in session at the Oxford High School. following which three were killed and eight others injured including a teacher.

The suspect a 15-year-old boy was immediately taken into custody and a handgun was recovered from his possession. The authorities recovered multiple shell casings in the school and believe around 15-20 shots were fired.

All the evacuated students were relocated to a nearby store for reunification with their relatives. About 25 agencies and close to 60 ambulances responded.

The families of the victims have been notified. It is not currently known whether the three students killed were targeted, Oakland County Undersheriff McCabe said.

My heart goes out to the families enduring the unimaginable grief of losing a loved one: President Biden said after a Michigan school shooting left 3 students dead & 8 people wounded.

Suspect, a 15-year-old boy turned himself in & handed over his pistol,” he added.