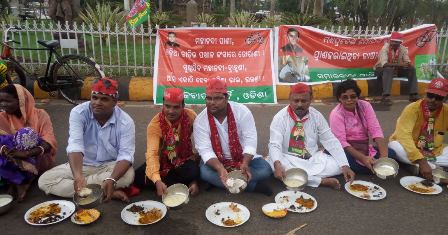 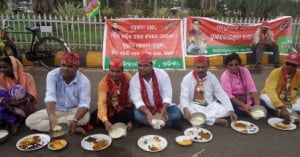 Bhubaneswar: Amid the high pitched war of words between the governments of Odisha and Chhattisgarh over the Mahanadi water issue, the Odisha unit of Samajwadi Party today resorted to a unique way to protest the stifling of water flow to the state.
Led by senior leader Rabi Behera, the members of the party sat on the main road at Master Canteen square and had watered-rice (Pakhala) with almost no water.
“River Brahmani and Mahanadi are drying up due to the construction of barrages by Jharkhand and Chhattisgarh Governments. We are holding this protest to tell them that no water is left even to eat watered-rice, which is the main food of Odisha. Like the Mahanadi river, even water in Pakhala is drying up,” said Behera.
The members of the SP, along with a few supporters, sat on the middle of the road and relished a meal of Pakhala and fish, which they claimed was from Mahanadi river.