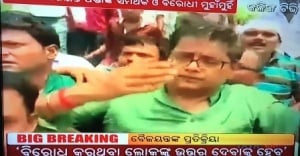 Shirdi: Odisha Health Minister and Mahanga MLA Pratap Jena has refuted the charge of the involvement of his supporters in the attack on Kendrapara MP Baijayant Panda during the inauguration of a drinking water project in the constituency today.

“I am in Shirdi to pay obeisance to Sai Baba. I am not aware of the controversy and related developments. I will respond once I return to Odisha,” he told Kalinga TV over phone.

Meanwhile, Rajya Sabha MP Pratap Deb has termed the incident “unfortunate” attributing it to possible misunderstanding and lack of coordination between the two groups. Party chief and Chief Minister will review the matter, he added..

Food, Supplies and Cooperation Minister Surjya Narayan Patro called it a “local issue”. He shrugged off the comments made by Baijayant Panda on the alleged infighting and intolerance within the party, saying Panda’s remarks should not be given any importance. Patro added that BJD remains strong and united and one person can’t cause any harm to it.

Union Petroleum Minister Dharmendra Pradhan slammed the BJD Government and termed the incident as ‘results of the arrogance of power’.