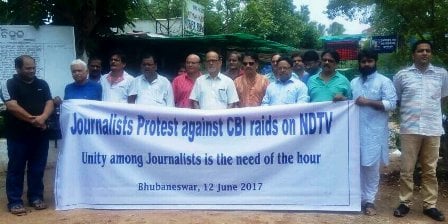 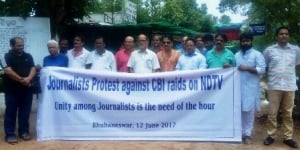 Bhubaneswar: Expressing solidarity with NDTV, senior journalists from various newspapers and channels gathered in front of Jaydev Bhawan here today to stage a protest against the CBI raids against the leading national news channel.

Members from the press carried a huge banner stating, “Unity among journalists is the need of the hour.”

“Journalists from Bhubaneswar have come together now to protest the CBI raids against NDTV. The raids clearly indicate that the Central Government is suppressing freedom of press,” said Prafulla Das, senior journalist, The Hindu.

The CBI conducted raids on the founder of NDTV, Dr Prannoy Roy and his wife Radhika Roy over a loan issue. The move had earlier been criticised by several journalists, media organisations and the Editors Guild of India.