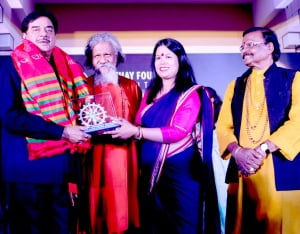 Bhubaneswar: The second edition of the Shrie Awards instituted by Parichay Foundation, was held at a city hotel on Saturday. BJP MP Shatrughan Sinha graced the occasion as the Chief Guest and felicitated men achievers from different fields.

While the Guru Award was presented to Padma Vibhushan Raghunath Mohapatra, Lifetime Achievement Award was given to Dr. Amarendra Khatua. Akshay Kumar Parija was felicitated in the field of Business Leadership and Showmanship. Similarly, awards were also given in the field of Medical Science, Sports, Social Service, Education, NRO, Media, Environment, Entrepreneurship, Special mention and CSR.

Praising the efforts of the Foundation, the MP said, “The amount of talent I have seen here in Bhubaneswar is rare. I congratulate the winners and wish them all the best.”

“Parichay has always made an attempt to give a new identity to Odia achievers, both men and women from across the country and outside, who have been quietly doing good work in various fields which in turn has had a positive impact on the society. The idea is to appreciate good work on one platform, be it on a smaller or a larger scale,” Rosalin Patasani Mishra, Head of Parichay Foundation said.