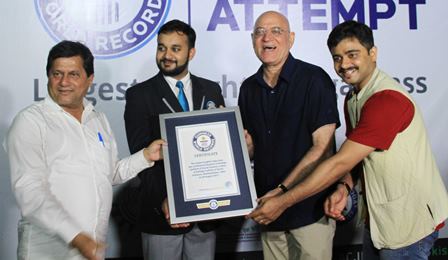 Bhubaneswar: Kalinga Institute of Social Sciences (KISS) made Odisha proud again by entering the Guinness Book of Records again for the third time on Tuesday.

The largest Tribal residential school in the world, which recently became a deemed university, made history after 15,991 of its students attended the Largest Laughter Yoga Class conducted by eminent laughter guru Dr. Madan Kataria.

This was confirmed by Guinness Book of Records official Swapnil Dangariker, who also handed over the certificate to Dr. Achyuta Samanta, founder of KISS and KIIT. The past Guinness Record in laughter Yoga was 1126.

Speaking on the occasion, Dr. Samanta expressed his gratitude to Dr. Kataria for conducting the Laughter Yoga Class. He also thanked the students who participated in the event and made the state and country proud by creating the Guinness World Records for third time. He said KISS is the pride of Odisha, glory of India and wonder of the world.

Students of the University arranged themselves into a massive human formation reading “WE URGE FOR WORLD PEACE” and set a Guinness world record for the ‘largest human sentence’. They also created a second world record on the same day for the ‘most simultaneous high-fives’.