Decide on window for exchange of demonetised notes in 2 weeks, SC tells Centre 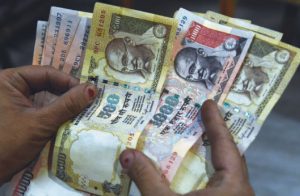 New Delhi: The Supreme Court of India on Tuesday granted the Centre and Reserve Bank of India (RBI) two weeks to consider granting a window to those who could not deposit their demonetised Rs. 500 and Rs. 1,000 currency notes in banks within the deadline for a compelling reason.

A bench headed by Chief Justice JS Khehar asked Solicitor General Ranjit Kumar to take instructions from the Union government on the issue.

The Solicitor General, representing the Centre, sought time to seek instructions for granting an opportunity to persons to deposit their money on a case-by-case basis.

The apex court was hearing a plea filed by group of citizens seeking a grace period for exchanging demonetised notes.

The Centre had recently told the court that it had taken a conscious decision not to extend the period beyond 30th December last year. It had said it was not legally bound to come out with a fresh notification to grant any grace period or a window.

Prime Minister Narendra Modi had announced the demonetisation of Rs. 500 and Rs. 1,000 currency notes on November 8, 2016.