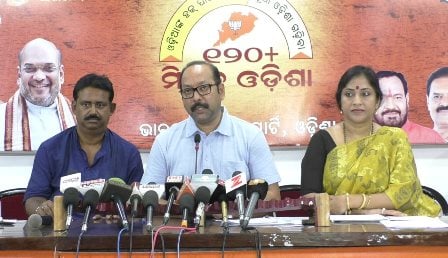 Bhubaneswar: Odisha BJP on Thursday came down heavily on the ruling BJD over irrigation of agricultural land alleging that the number of farmer suicides had risen manifold in the state due to the government’s failure to provide water to agricultural land.

The saffron party claimed that in its manifestos for various elections, the BJD has been promising the people of the state since 2000 that it will provide water to at least 35% of the agricultural land in each block across the state, but has miserably failed to keep its promise.

BJP also alleged that the Water Resources Department headed by Chief Minister Naveen Patnaik is the most corrupt department of the Odisha government where Percentage Commission (PC) was rampant.

“In its election manifestos, the BJD has repeatedly promised the people of the state to provide water to the agricultural land for irrigation. It failure to keep its promise has resulted in farmers of the state committing suicide,” alleged Odisha BJP’s state General Secretary Bhrugu Baxipatra in a press meet at party’s state office today.

“While Chief Minister Naveen Patnaik is urging to stop PC, it is rampant in the Water Resources Department headed by him. It is the most corrupt department of the state government,” he added.

The saffron party leader also alleged that the farmers living on the upper catchment of Vamsadhara, Nagavali, Mahendra Tanaya and Rushikulya rivers are not able to use the maximum water from the rivers as the state government has not taken any action in this regard.

Baxipatra asked the ruling BJD to explain the precarious irrigation situation in the state during its nine-day Padyatra.