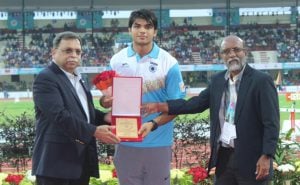 Bhubaneswar: World Junior Record Holder in javelin throw Neeraj Chopra was today presented with a World Record Trophy by the International Association of Athletics Federation (IAAF) in a special ceremony on the sidelines of the 22nd Asian Athletics Championships.

Athletics Federation of India (AFI) President Adille J Sumariwalla presented Chopra with the Trophy at the victory podium of the Kalinga Stadium.

The 19-year-old won the gold medal at the 2016 IAAF World U20 Championships in Bydgoszcz, Poland by throwing a distance of 86.48m, establishing a new world record at the junior level.

In that process, he also became the first Indian to ever win Gold at the World Championships.