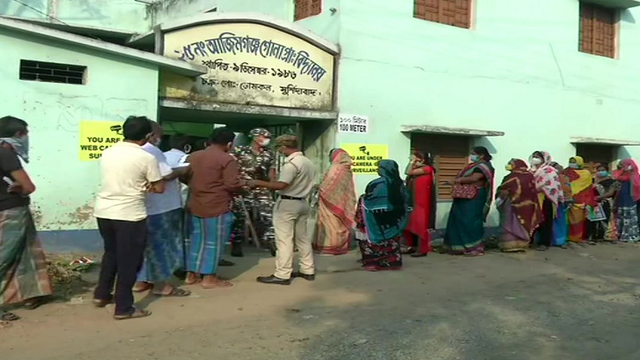 Kolkata: People came out in large numbers to exercise their franchise recording 16.04 per cent of polling in the last phase where 35 constituencies spanning across four districts went to polls on Thursday.

An analysis of the assembly seats on the parameters of Lok Sabha election shows that Trinamool Congress had a lead in 19 constituencies, BJP had an edge in 11 constituencies and the rest of the 5 seats were in control of Congress. The Left Front hardly had any impression in these 35 seats.

Congress leaders pay tributes to Ambedkar on his death…

A close look at the basic facts shows that the total number of electors including service voters in these constituencies are 84,93,255 of which 43,70,693 are male electors and 41,22,403 are female voters.

Election is going on in booth number 126 of Sitalkhuch assembly constituency in Coochbehar district where four persons were killed during the polling in the fourth phase on April 10.

The Commission will deploy 646 companies of central forces during the last phase with Birbhum having the highest deployment of 225 companies for its 11 constituencies.