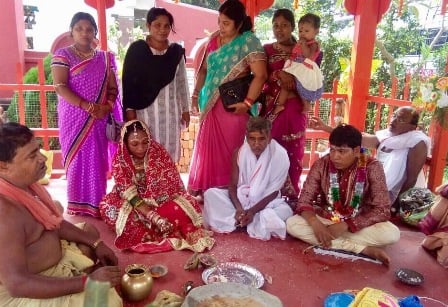 When 30-year old Ugorji Peace Nkechi first met Odia lad Amiya Ranjan Parida, little did she know that their relation would last a lifetime. She was working as a Quality Control Manager at a pharmaceutical company, where Amiya was hired as an engineer.

Like a perfect Bollywood script, they met, became friends and soon love blossomed. Soon, Amiya proposed her and Ugorji brought the matter before her family members. After their consent, Amiya’s parents were approached who also gave their nod.

Amiya and Ugorji flew back to India and solemnized their wedding in Kendrapara district, in the presence of the family members. Since, Ugorji’s family failed to arrive due to visa issues, one of acquaintances of Amiya’s family performed the ‘kanyadaan’ ritual.