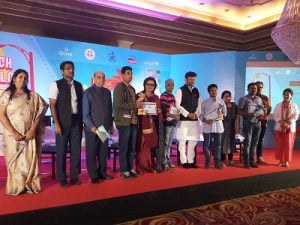 Bhubaneswar: The award ceremony 2017 edition of the annual Kallola short film competition was held in Bhubaneswar on Saturday. The theme for this year was ‘End Violence against Children – Soch Badlo.’

Veteran actress and director Aparna Sen and Ollywood actor and MP Anubhav Mohanty graced the occasion as the Chief Guest.

The first prize was awarded by Sangram Keshari Sahu for the movie ‘Bachpan,’ he second prize went to Asha Gobara Ra’ by Biswanath Swain and the third prize was clinched by ‘Soch Badlo’ by Ramachandra Meher.

Five short films produced by fifteen children were screened on the occasion.

The short film contest is conducted by UNICEF and Aaina, an Odisha based voluntary organisation.