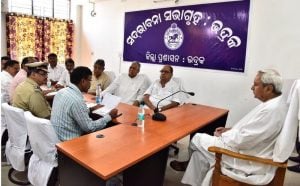 Chief Minister Naveen Patnaik managed to boost the confidence of common people in Bhadrak by visiting the strife-torn town, interacting with affected people, assuring compensation to the victims and promising strong action against the hooligans responsible for disturbing the peace and harmony in the region.

The CM chaired a high level meeting with the district administration and top government officers of the state. He directed the officials to assess the detailed damage suffered by the people and report within three days for provision of financials assistance for livelihood restoration.

He said, he would soon announce a package for the people who have lost their livelihood. Besides, he asked the administration to open new vending zones to rehabilitate the street vendors to help them to carry their business.

Directing for strong action against the mischief mongers, the CM said, the state government will take strong steps to counter the evil design of the divisive forces for creating social discord and violence in the name of religion.