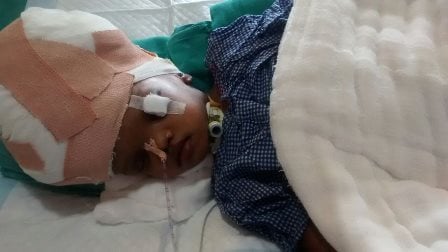 New Delhi: In a major relief for the authorities of All India Institute of Medical Sciences (AIIMS), New Delhi, and what can gladden the hearts of the thousands of well-wishers, one of the twins Balia, who was quite critical in comparison to other twin Jaga, has been taken off ventilator support on Saturday.

According to the latest development of his health condition, Balia, who was in the ventilator support for a month after their second phase separation surgery on October 25, is taken off the ventilator and being treated in the ICU department of the medical college and hospital.

Sources at the hospital said that Balia is now out of danger and is taking liquid food through his nose.

On the other hand, Jaga is recovering in good space. Apart from taking some foods on his own, playing with balls and listening to music, he has now started calling ‘Bapa, Maa’ (father and mother).  He was taken of the ventilator on November 1.

Notably, Kandhamal’s  Jaga-Balia case came to light after Kalinga TV aired a special programme on them in its ‘Kalinga Bandhu’ programme first on November 2016 and then on June 7, 2017. Following the airing of the program, Chief Minister Naveen Patnaik took initiative and sanctioned Rs 1 Crore from the CM’s Relief Fund for the twins’ surgery. People of different walks of life including street beggars also donated money for their treatment and invoked god’s blessing for their speedy recovery.

The first phase of surgery on the twins was carried out on August 28 and the second phase on October 25.