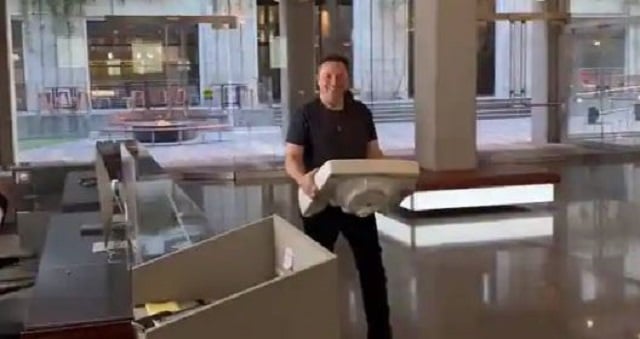 The world’s richest man Elon Musk was seen carrying a bathroom sink inside the Twitter headquarters at San Francisco.

Elon Musk posted a video of himself entering the Twitter headquarters carrying a bathroom sink with the caption “Entering Twitter HQ – Let that sink in”.

Musk also mentioned in another tweet that he was meeting “a lot of cool people at Twitter”.

He earlier updated his profile’s bio to read “Chief Twit” hours before, giving the impression that he was the company’s top official.

Earlier, musk announced several months ago that he was trying to buy the social media platform for $44 billion, before later trying to back out of the deal.

Musk has blamed that they were misleading him and Twitter investors over the number of fake accounts on the social media platform.

According to sources, CEO Parag Agrawal and Finance chief Ned Segal were in Twitter’s headquarter in San Francisco when the deal closed and they were escorted out.