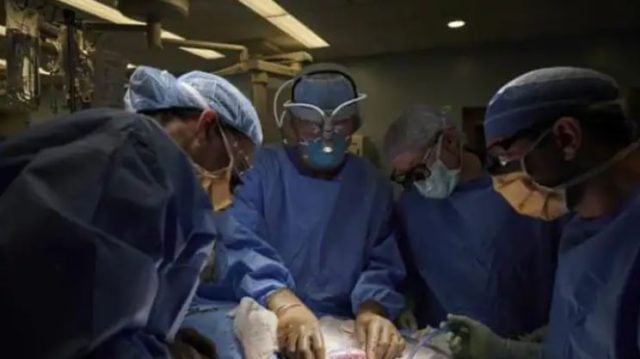 New York:  In a first, doctors at NYU Langone Health in New York temporarily transplanted a pig’s kidney onto a human, a ‘significant step’ toward animal-to-human organ transplants, the media reported.

The recipient of the transplant was a brain-dead patient, whose kidneys were dysfunctional, the Independent reported. The team of doctors kept the woman’s body going on a ventilator after her family agreed to the experiment. To avoid immediate rejection from the human immune system due to the presence of a sugar molecule in pig cells called Glycan, the doctors altered the pig’s genes.The team of doctors then attached the pig kidney to the patient’s blood vessels, and kept it outside the patient’s body for three days for observation.

They discovered the kidney had not been rejected by the patient’s autoimmune response. Moreover, the patient’s abnormal creatinine level — indicating poor kidney function — returned to normal, the report said. The kidneys filtered waste and produced urine as was expected, Robert Montgomery, a transplant surgeon and lead scientist of the study was quoted as saying.

Such a surgery can give hope to patients with end-stage kidney failure and become a short term solution till a kidney becomes available, he said.

Animal-to-human transplants, known as xenotransplantations, date back to the 17th century, when attempts were made to use animal blood for transfusion.

Scientists have recently turned to pigs as their organs are comparable to humans. The pig used in the research had been provided by Revivicor, a subsidiary of United Therapeutics, a company that engineered a herd of 100 others at a facility in Iowa, the report said. The Food and Drug Administration (FDA) approved the gene alteration in the Revivicor pigs as safe for human food consumption and medicine in December last year. But the FDA said more documentation was needed for pig organ transplants in humans.

Denmark Open 2021: Saina bows out, Lakshya advances to next round