US President received Ukrainian President at the White House. Zelensky is scheduled to address a joint session of the US Congress. 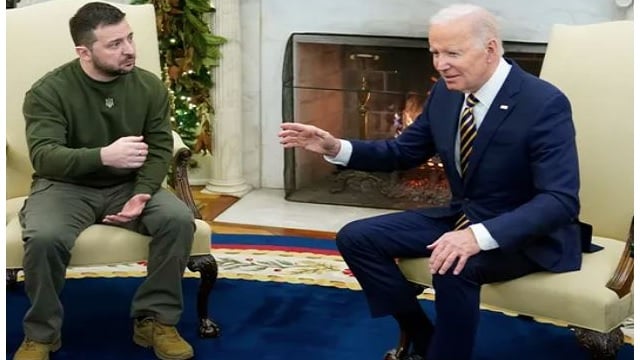 Washington: US President Joe Biden received Ukrainian President Volodymyr Zelensky at the White House to mark the unmistakable support of US for the nation as it continues the fight against Russia, with its superior military prowess.

In remarks from the Oval Office, Biden on Wednesday said he was “delighted” to receive Zelensky. Zelensky similarly offered his appreciation and gratefulness of all Ukrainians.

The Ukrainian President is scheduled to address a joint session of the US Congress, which is considering a nearly $50 billion emergency aid package for Ukraine.

While US aid to Ukraine has received bipartisan support, some Republicans are coming out in opposition of it, and are calling for an end to it. Zelensky will have them in his mind during his address as he seeks to return home reassured of continued US support and that of the Western alliance it leads.

This is Zelensky’s first visit outside Ukraine after the Russian invasion, and his second to the US. His previous visit to the US was in September 2021, which came after months of testy relationship with the then President Donald Trump.

Though Zelensky never visited Trump in the White House, they did meet on the sidelines of the UN General Assembly in New York.

A senior Biden administration official, who previewed the visit for reporters said that the two leaders will have an in-depth strategic discussion on the way ahead on the battlefield, on the capabilities and training that the US and its allies will continue to provide Ukraine, on the sanctions and export controls that have been imposed and continuation of tightening and reinforcement that have placed significant costs on Russia’s economy and defence industrial base, and on the economic and energy sector assistance as well as the humanitarian assistance that US has been providing for the people of Ukraine.

US lawmakers on Tuesday had announced a bipartisan deal to provide nearly $50 billion in emergency aid to Ukraine in its battle against Russia. With this, the total US aid to Ukraine in this effort goes up to $100 billion.

There is an urgency to the funding as Republicans, who take charge of the House of Representatives in January, are likely to be less generous. Many Republicans have been opposing increasing aid to Ukraine and they will now have the opportunity to cut it.

Zelensky has not travelled abroad since February but has reached out through video appearances around the world, including the US Congress, parliaments of many Western countries and the UN, both the General Assembly and the Security Council.

He has been an extremely effective advocate for his country’s war efforts, rallying and pushing countries to do more.