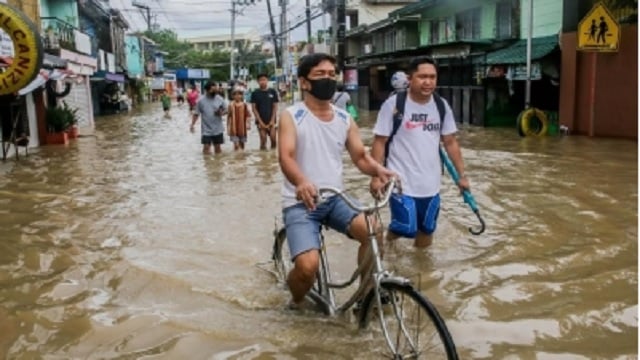 Manila: At least 98 people have died due to the severe tropical storm Nalgae that battered the Philippines over the weekend, triggering flash floods and landslides in many parts of the country, the government said on Monday.

The National Disaster Risk Reduction and Management Council said 58 victims have already been identified, while the identities of the other 40 are being verified, reports Xinhua news agency.

Of the 63 reported missing, the agency said 25 have been confirmed, while the identities of the other 38 are still being verified.

The agency said 53 deaths were from the Bangsamoro Autonomous Region in Muslim Mindanao (BARMM).

The rest of the fatalities were from nine regions on the main Luzon island and other areas on Mindanao island in the southern Philippines outside of the BARMM.

The agency said Nalgae affected over 1.8 million people, damaged 364 roads and 82 bridges, and caused power outages in many areas.

People in flood-ravaged towns started cleaning up on Sunday, scooping mud, hosing off dirt, and cutting trees and branches fractured by winds. Scores of houses and buildings were underwater.

Nalgae is the 16th tropical cyclone to lash the Philippines this year.

It slammed into Catanduanes, an island province in the Bicol region, before dawn on October 29.

The Philippines is one of the most disaster-prone countries globally, mainly due to its location in the Pacific Ring of Fire and Pacific typhoon belt.

On average, the archipelagic country experiences 20 typhoons yearly, some of which are intense and destructive.

In April, tropical storm Megi dumped rains in central and southern parts of the Philippines, inundating many areas and causing landslides, resulting in over 220 deaths.

Maruti Suzuki recalls over 9,900 units of Wagon R, Celerio, And Ignis due to a brake part problem