Bhubaneswar: Ace sprinter from Odisha Dutee Chand has lately made it to the TIME 100 Next 2019 list. Name of the India’s fastest woman and pride of Odisha has been added to the list among World’s most 100 rising stars. The TIME 100 Next is a list of rising stars who are shaping the future of business, entertainment, sports, politics, health, science, and activism. 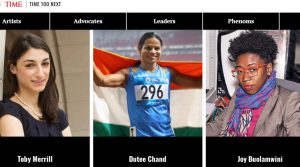 “On the track, Dutee Chand sprints. Off the track, she fights.the 100-m runner from India is preparing to make her second Olympic appearance, in 2020, in Tokyo. In July, she became the first Indian sprinter to win the 100-m at the World University Games. But back in 2014, Chand was effectively banned from competition because of her high natural testosterone levels, she appealed the verdict and won a precedent-setting case. This year, Chand announced she was in a same-sex relationship, making her the first openly gay athlete in India’s history,” is how the magazine describes her.

A student of KIIT, Dutee has expressed her gratitude to the TIME for acknowledging her fight. She says, “I am delighted to receive this recognition from the TIME. I believe in gender equality and will continue to fight for the rights of young girls and women in sports and in society.”

Ace Sprinter Dutee Chand is the current national champion in the women’s 100 metres event. She is the third Indian woman to ever qualify for the Women’s 100 metres event at the Summer Olympic Games. In 2018, Chand clinched silver in women’s 100m at the Jakarta Asian Games. It was India’s first medal in this event since 1998. In 2019, she became the first Indian sprinter to win gold at the Universiade, clocking 11.32 seconds in the 100m race. Dutee is also India’s first athlete to openly come out as a member of the LGBTQ+ community when she spoke about being in a same-sex relationship in 2019.

Yogi Adityanath govt to felicitate top 10 GST payers in UP