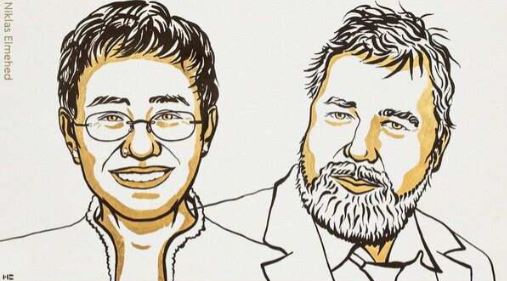 Oslo: The 2021 Nobel Peace Prize was awarded Friday to journalists Maria Ressa of the Philippines and Dmitry Muratov of Russia.

They were citing for their fight for freedom of expression.

The winners were announced Friday by Berit Reiss-Andersen, chair of the Norwegian Nobel Committee.

Maria Ressa is a leading reporter in the Philippines who has been previously honoured for fighting disinformation and attacks on the free press.

Dmitry Muratov is editor-in-chief of Novaya Gazeta, an independent newspaper in Russia which has run investigations on corruption, human rights violations and abuse of power.

The award is intended to honour an individual or organization that has done the most or the best work for fraternity between nations.

20 killed after van falls into ditch in Pakistan’s…

5 killed as gunmen open fire in market in Izeh city

Announcing the 2021 laureates, the Norwegian Nobel Committee said it chose Ressa, the founder and chief of Rappler, digital media company for investigative journalism, and Muratov, the founder of Russian daily Novaya Gazeta, for their efforts to safeguard freedom of expression, “which is a precondition for democracy and lasting peace”, and as “representatives of all journalists who stand up for this ideal in a world in which democracy and freedom of the press face increasingly adverse conditions”.

Stressing “free, independent and fact-based journalism serves to protect against abuse of power, lies, and war propaganda”, the Committee said that it “is convinced that freedom of expression and freedom of information help to ensure an informed public” and that these rights are “crucial prerequisites for democracy and protect against war and conflict”.

“The award of the Nobel Peace Prize to Maria Ressa and Dmitry Muratov is intended to underscore the importance of protecting and defending these fundamental rights,” it said.

It noted that without freedom of expression and freedom of the press, it will be difficult to successfully promote fraternity between nations, disarmament and a better world order to succeed in our time, and thus, this year’s Nobel Peace Prize award “is therefore firmly anchored in the provisions of Alfred Nobel’s will”.