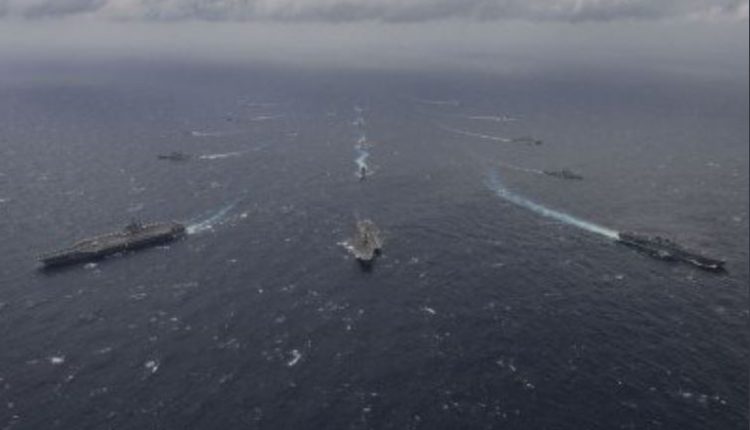 New Delhi: India, the US and Japan on Thursday began the ‘Malabar 2019’ trilateral maritime exercise in the Pacific Ocean. The exercise, in which the Indian Navy has deployed two ships, will end on October 4.

Defence sources said two frontline indigenously developed ships — INS Sahyadri, INS Kiltan –have been deployed for the exercise. Sahyadri is a multi-purpose guided missile frigate while the Kiltan is an anti-submarine warfare corvette.

Apart from the ships, a P8I long-range maritime patrol aircraft was also sent to Japan for the exercise.

Officials said the US Navy is being represented by USS McCampbell, a Los Angeles-class attack submarine and a P8A long range maritime patrol aircraft.

Also Read: Choksi Will Be Extradited After He Exhausts Appeals: Antigua PM

According to officials, the objective of Malabar 2019, which is being conducted for the 33rd time, is to further strengthen naval ties between the three countries. The exercise also aims to enhance cooperation and inter-operability, based on shared values and principles, between the three Navies.

Complex maritime operations in the surface, sub-surface and air domains including anti-submarine warfare, anti-air and anti-surface firings, maritime interdiction operations will be conducted during the sea-phase of the exercise.

Besides, official visits, professional interactions, sports fixtures and social events will also be conducted during the harbour phase.

US Army warns of potential violence at ‘Joker’ screenings