China has reopened its borders to international visitors for the first time since it imposed travel restrictions in March 2020. 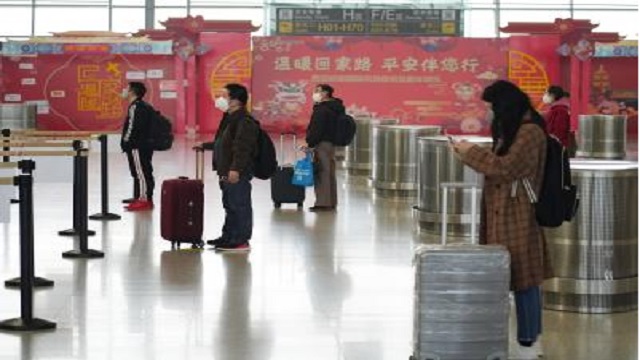 Hong Kong:  China’s long-awaited border reopening to international visitors for the first time since it imposed travel restrictions in March 2020, the final step in its dismantling of Covid Zero.

China will no longer need to quarantine for arrivals – after authorities marking a significant change in the country’s Covid policy as it battles a surge in cases, the BBC reported.

They will still require proof of a negative PCR test taken within 48 hours of travelling.

The immediate impact is a surge of overseas Chinese coming back home, many of whom have not seen family for years.

The move has been welcomed by many eager to reunite with families, the BBC reported.

In Hong Kong, 400,000 people are expected to travel into mainland China in the coming weeks with long queues for flights into cities including Beijing and Xiamen.

On Sunday, double decker coaches packed with travellers arrived at the Hong Kong-Zhuhai-Macau Bridge to catch buses to the Guangdong province – among them were college students returning home, BBC reported.

The country’s reopening comes at the start of “chun yun”, the first period of Lunar New Year travel. Before the pandemic, it was the largest annual worldwide migration of people returning home to spend time with their family.

Two billion trips are expected to be made this Lunar New Year, double the number that travelled last year.

Li Hua, who travelled from the UK to China – where her family lives – for the festival said it had been “too long” since she had returned, “I’m so happy to be back, and breathe Chinese air. So happy, so happy”.

“I haven’t been home in almost two years, so the announcement felt like a fever dream,” said Connor Zhao, a 25-year-old consultant who lives in San Francisco. He’s currently on holiday in Bangkok and will fly to Qingdao on Jan. 19, with his trip including a layover in Hong Kong, which has more available flights into the mainland.

“I’m very excited to see my parents. Getting to spend Chinese New Year with them means a lot to me,” he said.

But there is concern from some that opening the borders will result in more transmission of Covid-19. China has rejoined the rest of the world.

1 killed, 40 injured in road accident at Burdwan in West Bengal