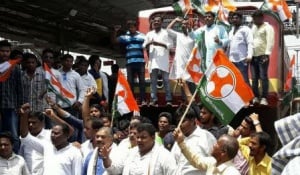 Bhubaneswar: Protesting the killing of farmers at Mandsaur in Madhya Pradesh, the youth wing of Congress staged a rail roko across the state on Friday.

Youth activists of the grand old party shouted slogans against Prime Minister Narendra Modi and Madhya Pradesh Chief Minister Shivraj Chouhan during the rail roko. Some of them were seen climbing on the trains.

They alleged that the BJP government is an anti-farmer government that never works for the betterment of the farmers. The innocent farmers are being killed when they raise their voice to press their demands.

They also said termed Congress Vice-President Rahul Gandhi’s detention during his visit to Mandsaur to meet the bereaved kin of the deceased farmers ‘political vendetta’.

Former Minister Suresh Routray was among other senior leaders who participated in the rail roko at the Bhubaneswar railway station.