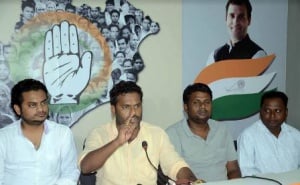 Bhubaneswar: The Odisha unit of Youth Congress on Sunday came down heavily on the Union government calling it an anti-farmer government and threatened to oppose the visit of Central Ministers across Odisha.

At a press meet in Bhubaneswar, Youth Congress Secretary Rajiv Patnaik alleged that the Union government has failed to address the issues of the farmers and has killed them when they have raised voice for their rights.

“Congress Vice President Rahul Gandhi was detained for showing his sympathy during his visit to Mandsaur in Madhya Pradesh, where at least six farmers were shot dead by the police during a protest meeting,” he said.

The Youth Congress leader also alleged that the NDA government had failed miserably in keeping its promise of giving employment to two crore youths every year.

“While the productivity of farmers has gone down, the rate of unemployment and poverty has increased in the past three years. Besides, the prices of oil and essential commodities have gone up, which proves the failure of the Union government. Instead of solving the problems, it kills those who raise voices. If the Modi-government continues to do so, the Youth Congress will oppose the visit of the Ministers across the state,” Patnaik said.

The youth members of the political outfit had hurled eggs at Union Agriculture Minister Radhamohan Singh’s convoy near the State Guest House on Saturday.

They also showed him black flags in protest against the killing of six farmers at Mandsaur.

The Commissionerate Police had arrested some protesters, including its state unit president Lokanath Maharathy, in connection with the incident.