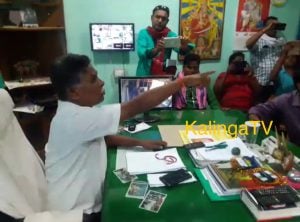 Jharsuguda: Women of Belpahar in Jharsuguda district protested against water scarcity in the town in a unique way on Tuesday.

Angry over shortage of drinking water in their locality, the women marched in a rally in the town, barged into the NAC office and pelted their bangles at NAC chairman Parshuram Sahoo.

They had staged a road blockade on the National Highway for five hours yesterday demanding an early solution to the water shortage problem. Later, they lifted it following an assurance from the NAC chairman to solve the problem.

However, they again took to the streets today as some supporters of Sahoo barred some women from taking water from the bore-well over yesterday’s road blockade. Angry at this, the women went to the chairman’s office to bring the matter to his notice. Once there, they vented their anger out by hurling their bangles on the Chairman.